It's time for another scavenger hunt!

I love these things. I can't win this one because at least one person finished before me this time. In the you-snooze-you-lose category, she used the same picture that I had planned to use on the very first words, Aunt Ant. That Actonbell.

To make it easier on myself, I decided to not look at the rest of hers. That way I can claim not to know that she used one that I now pick.

Onward, if not upward:

Aunt Ant: This is a cricket visiting his Aunt Ant. I hope she doesn't think he's lookin' for a handout. 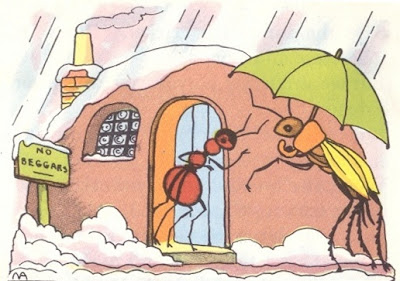 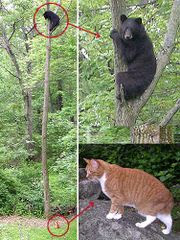 This bear has been treed by a cat! The bear below wonders, WTF?

Creamy Cow:
At state fairs across the country, things are carved and molded out of butter. This is a butter cow, and you can't get much creamier than that. Don't look at it too long unless you can afford to gain mega pounds. 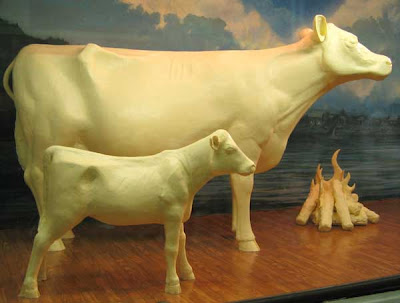 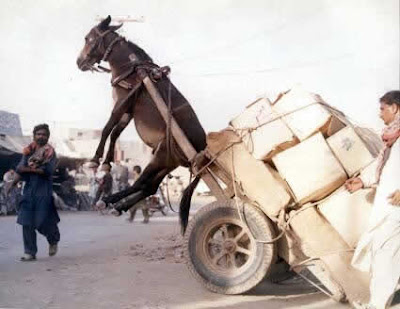 Here the donkey isn't the real dummy, it's the driver. 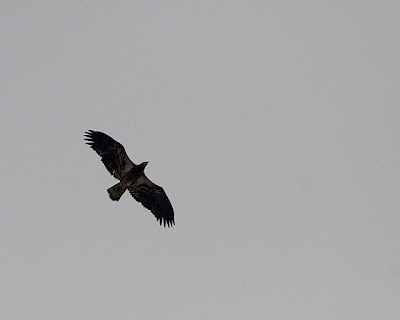 Even this eagle doesn't know how he flies so high. His wings are fairly even too. 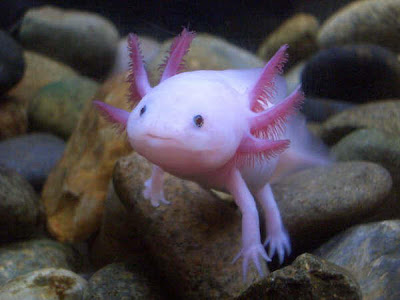 Why float when you can walk? 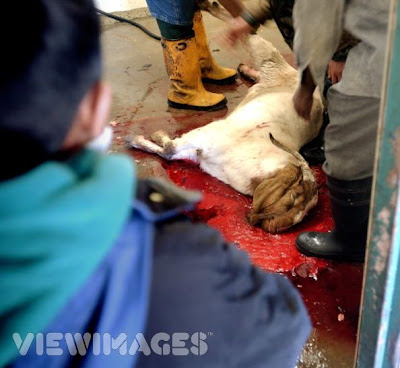 This goat sacrifice is gross. But I'll eat it after it's all cleaned and cooked. 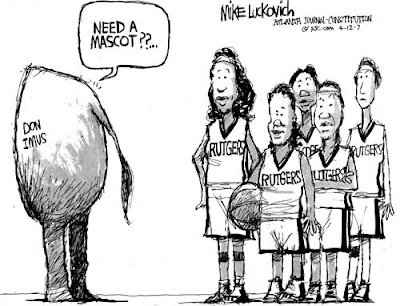 A horse's ass is about half of a horse I think.
But I'll measure to see: 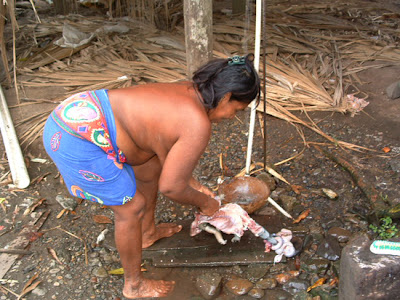 This Indian is cleaning an iguana in order to cook it I guess. Again, I think it's gross to look at it, but I'll try eating it if she offers me some. Probably tastes like snake. Of course snake tastes like chicken. 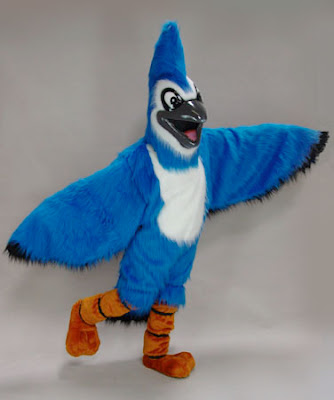 This looks like a joke to me. But then so does this below: 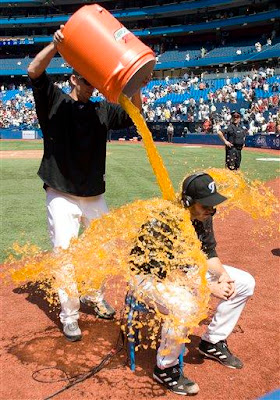 I imagine that the Blue Jays player who is pouring the liquid thinks this is a better joke than the one who is getting wet does. 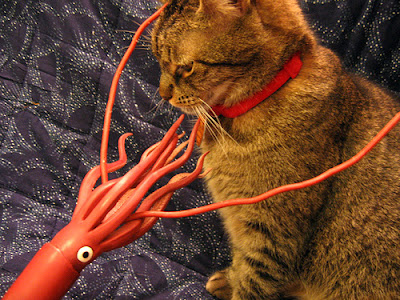 This is a kitten and a kraken in the kitchen.

Below is a kraken that is too big for the microwave. I think a kraken is supposed to be really big. 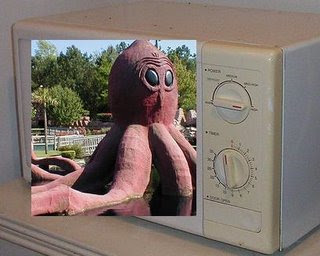 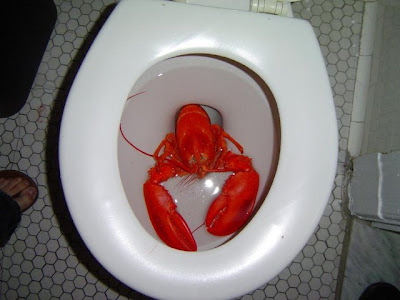 This lobster is lonely, and so is the dumb guy who thought this would be a good way to store a lobster. 'Course he wonders why he can't get a girl to come over and help him eat it. 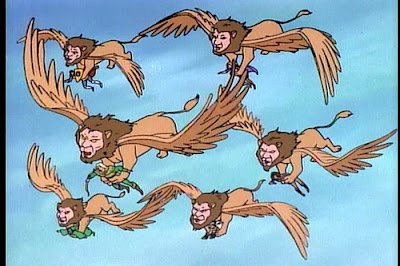 Nosy Narwhal: All Narwhals are nosy. It's just their nature. 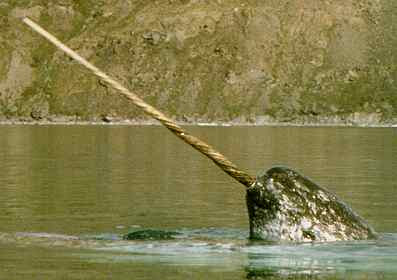 I'd hate to see one with its nose out of joint. 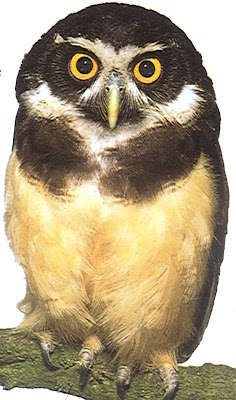 Oval's mother meant to name her Opal, but she didn't know how to spell it. Sorta like what happened to Oprah. Sh*t happens. 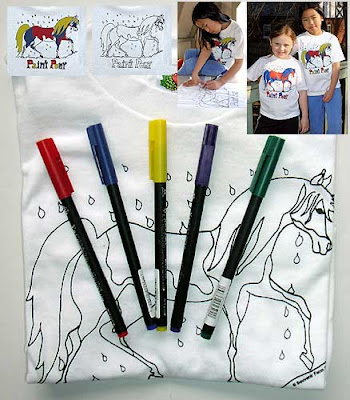 This will be a painted pony right after you finish painting it. It's an audience participation thingie.

Quantum Quetzal:
I don't know what a quantum quetzal is and you probably don't either. So I could put up a picture of anything.

This here is the quantumest quetzal I could find.

This rat is not gonna be 'round much longer.

Silver snake:
I fear/hate all things snake, so I will not be spending any time on this one.

I could never wear this pin. *Shudder*. 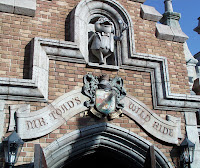 That's Mr. Toad high up there in his tower. 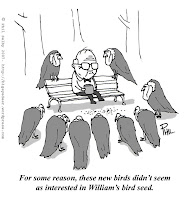 That's a vapid joke, no? Please, don't carrion about it. 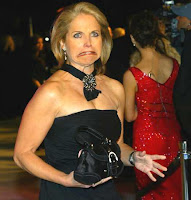 Some wise-guy weasel took this awful photo. Some wise-ass weasel blogger posted it. That TLP.

This friendly Xenops is waving it's wing at you. Now, that's friendly. Just play along, okay?

This yak is just about to vear off course and getcha!

This one doesn't know which way it was going in the first place. 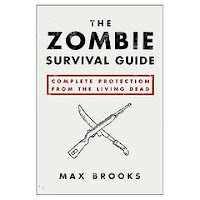 My zorilla got done in by the zombies around here. So I got this book so that sorta thing doesn't happen again.

I hate those damn zombie parades. Ties up traffic forever.
Posted by TLP at 8:29 PM

Funny stuff! I bet Katie Couric wishes no one had ever seen her do that with her face. That is the weirdest thing I ever saw.

You and your young'n are both champs. After giving it a try, we really appreciate your work! I couldn't find half of them. You are so clever!

You might be the first person to do all the letters. These are fun to read and look at. I'm too lazy to do them, but I like the results you get.

i wouldn't know a manticore if it bit me in the posterior so ya got no arguments from me!

Even though I am lazy myself, I love to go through these collections, too. Very funny.

I especially love the bear and the pussycat - and the donkey. :-)

Hey, I could have sworn I left a very smart ass comment here this morning. I must have been asleep again.

As always, your pictures and comments are hysterical. You are the first person to complete the whole list, so you still have gloating rights; D

Clever idea and a clever entry. Like other slackers above, I like to see them, but lacking the attention span to do them.

This is a heckuva job, TLP. Really truly.

But please remember to let me know if you find out what a manitcore is. Might be good in 20 questions.

great job, tlp!! hey, you know what? i just watched part of a movie about zombies on sci-fi, 'wicked little things'! i love when you do these!

Golly what a great post early on a Monday morning. Brilliant! Even if I don't know what some of the are:)

Wow, you are so good at finding all these pictures! A fun read, other than the dead animals of course.

OldLady Of The Hills said...

YOU ARE AMAZING, Lucy!!!
How do you do this? It looks totally impossible to me...I think you are not only a genius, but...you have the patience of a saint! Trying to find these things to 'fill the bill'...? WOW!
You are utterly awesome!

Well done! lol on the Zombie Parade. That poor goat....

Gary the Axolotl is so thrilled that you have a picture of him! (Floating Fish.) I won't tell you what Gary's obsession is. You don't want to know.
I did a scavenger hunt too, but true to form, mine was twisted.